Ronald Lu & Partners, HK had implemented Deltek Vision 5.1 in 2008 and had been live for 2 years.

I received an email from the founder’s son, Bryant Lu saying that although they had been live for 2 years, their accounting department was still doing a lot of accounting and reporting on spread sheets. After I spent a week in their offices I found the following major issues that needed correcting:

0. They needed to convert from Vision 5 to 6, which we accomplished in 2 weeks.

1. Their work break down structure for every project was the same, displaying the 8 standardized phases of a project that they took each project through, but not reflecting the actual milestones and deliverables of the project.  Thus, they were unable to produce meaningful reports from Vision that could show budget vs. actuals, expected revenues or EAC reports tied to project milestones.  Instead, they were maintaining a completely separate set of financials outside of Vision on an organized but extensive set of Excel spreadsheets so they could track consultant expenses, milestones, invoices, and receivables.

2. Their entire set of P+L statements and Project Earnings reports were being produced from spreadsheets in order to show P+L across companies or divisions. The reason for this was because after going live they had adopted a new organizational structure which consisted of studios (which is common in architectural firms).  Because the studios were not represented in the data in Vision, it was not possible to produce any reports based upon studio from the application.  This affected all of their performance reporting and financial reporting.

Just tackling these two issues implied that I would have to do the following:

1. Restructure the work break down structure (WBS) for every project in the database to reflect true milestones and deliverables (or start over from scratch with a new database and a new go live date, which would mean re-importing historical data… essentially doing their implementation completely over).

2. Either convert their current organization scheme to one that considered the studios, or find some way to generate their entire financial report set using a custom field in the project infocenter which would reflect the studio a project was assigned to.
While the problems and solutions described above are only numbered 1 and 2, there are many implied requirements that would come into play as I executed this project over the next 4 months.  Some of the issues I encountered and resolved were:

– In Deltek Vision, when you key convert a WBS item like a phase or task to move it to another project, phase or task (not merely changing the number), it completely ignores the invoice history data during the key conversion process.  Since we decided we would key convert every project into a new, meaningful work breakdown structure, this meant that I had to write sql scripts to convert the invoice history as well.

– The projects that RLP undertakes can last many years, and often have over 100 phases and tasks. The interface for Deltek Vision does not yet allow a user to update fee or budget amounts in a grid like format that shows the entire project structure.  During the execution of this project I built a Microsoft Access based application they could use for both data entry for the conversion (to enter the WBS for projects into Vision) and to use after the conversion for adjusting fees and budgets for projects, as well as enter fees and budgets for new projects.

– Since it was decided not to restructure their organizational scheme in Vision (this was a management decision) it was necessary to develop custom reports to satisfy their entire financial reporting set.  This included P+L reports, balance sheet reports and forecasting reports.

– Because of the language barriers (Vision is not yet localized in Cantonese, the Hong Kong version of Chinese), it was decided we would not implement Resource Planning.  Also, some projects could actually commence and continue in execution for months before actually becoming a signed project.  Thus, it was necessary to in a sense “bill time to opportunities”.  So instead we came up with a solution for revenue and opportunity forecasting using the project info center only.

There were of course many more issues that we worked through and solved throughout the course of the project.  Bottom line is that we completed and went live with the new project structure and report set by December of that year.  Working on site, together with their executive and accounting departments we were able to complete 6 to 8 months of work in 5 months.

Here are some example images and reports from after their implementation: 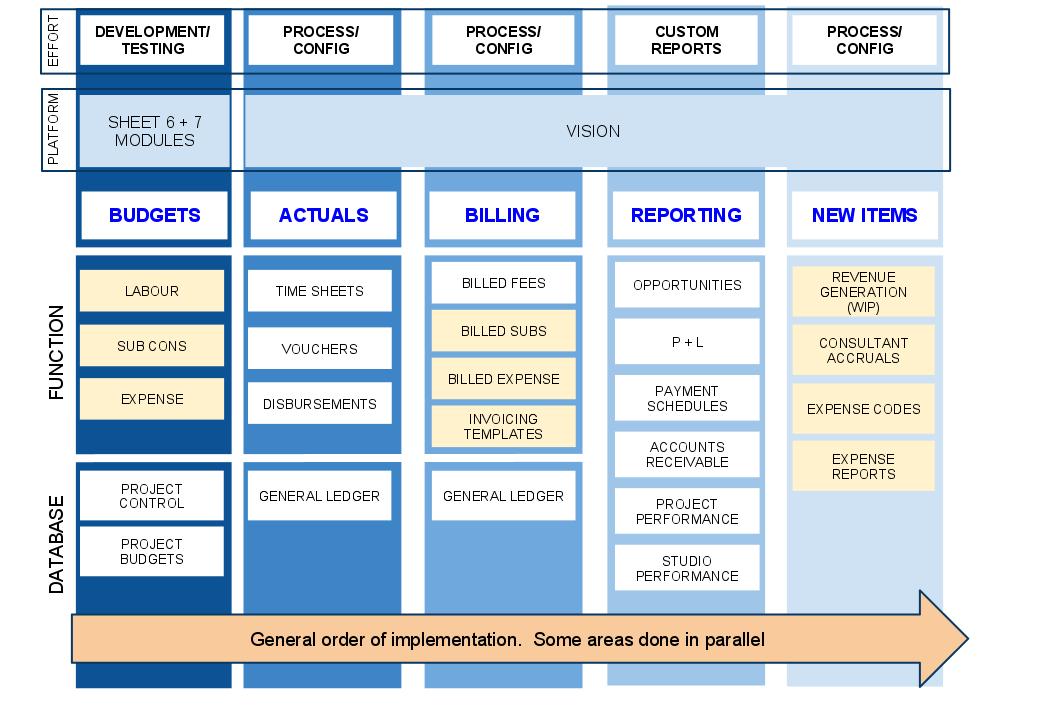 This shows the mission critical business path, order of priority for phased restructure, area of effort and timeline for the phased restructuring of their Vision implementation.
(I will be adding to this case study with more images and samples… later this week)